Dada (ダダ), three-faced phantom (三面怪人 Sanmen Kaijin), may not be the most popular Senjin (alien) or Kaiju (monster) in Ultraman, but he's definitely a childhood nightmare for many. This cosmic man, sent to the earth to collect human specimens to advance some form of research, is mysterious and weird with three different faces. Combined with teleportation, through-wall and invisibility, he is one of the most terrifying monsters in the Ultraman series. 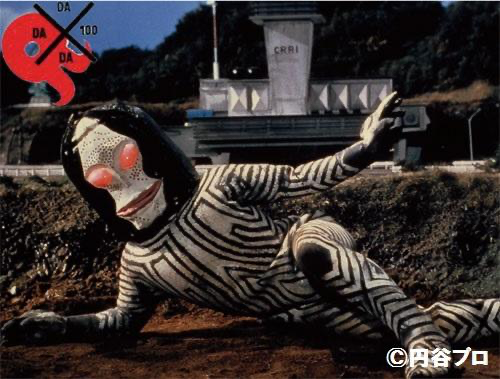 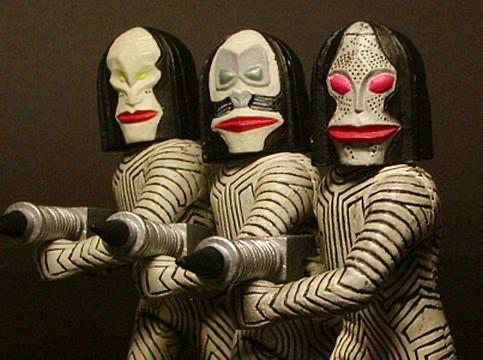 Dada is designed by the SFX visual artist Toru Narita (成田亨). Different from other aliens or monsters, Dada's body is close to human and covered all over with black and white geometric stripes. Inspired by M.C. Escher's optical and visual illusion style, this figure is full of mystery, avantgarde and bold, beyond The Times and making people unforgettable.

The arrangement of geometric lines in optical illusion can produce various illusion of perspective and illusion of motion. 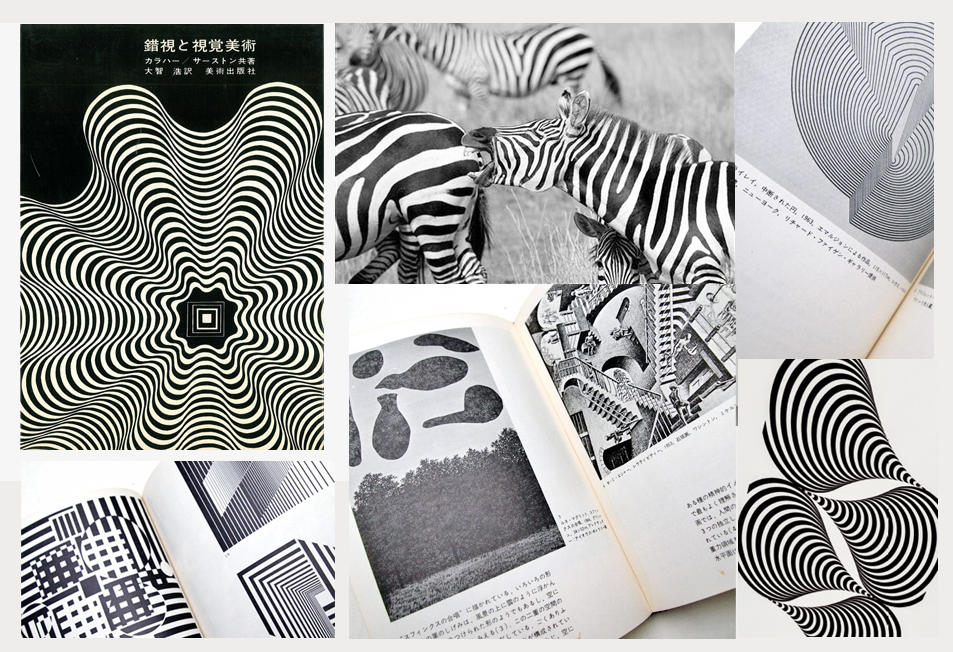 The geometric aesthetic of black and white lines is a kind of eternal mathematical beauty. In fashion, geometric lines are classic design elements. The following is a design by British brand Katie Eary. Although the designers were inspired by David Bowie and Lou Reed, the use of stripes is common to Dada. 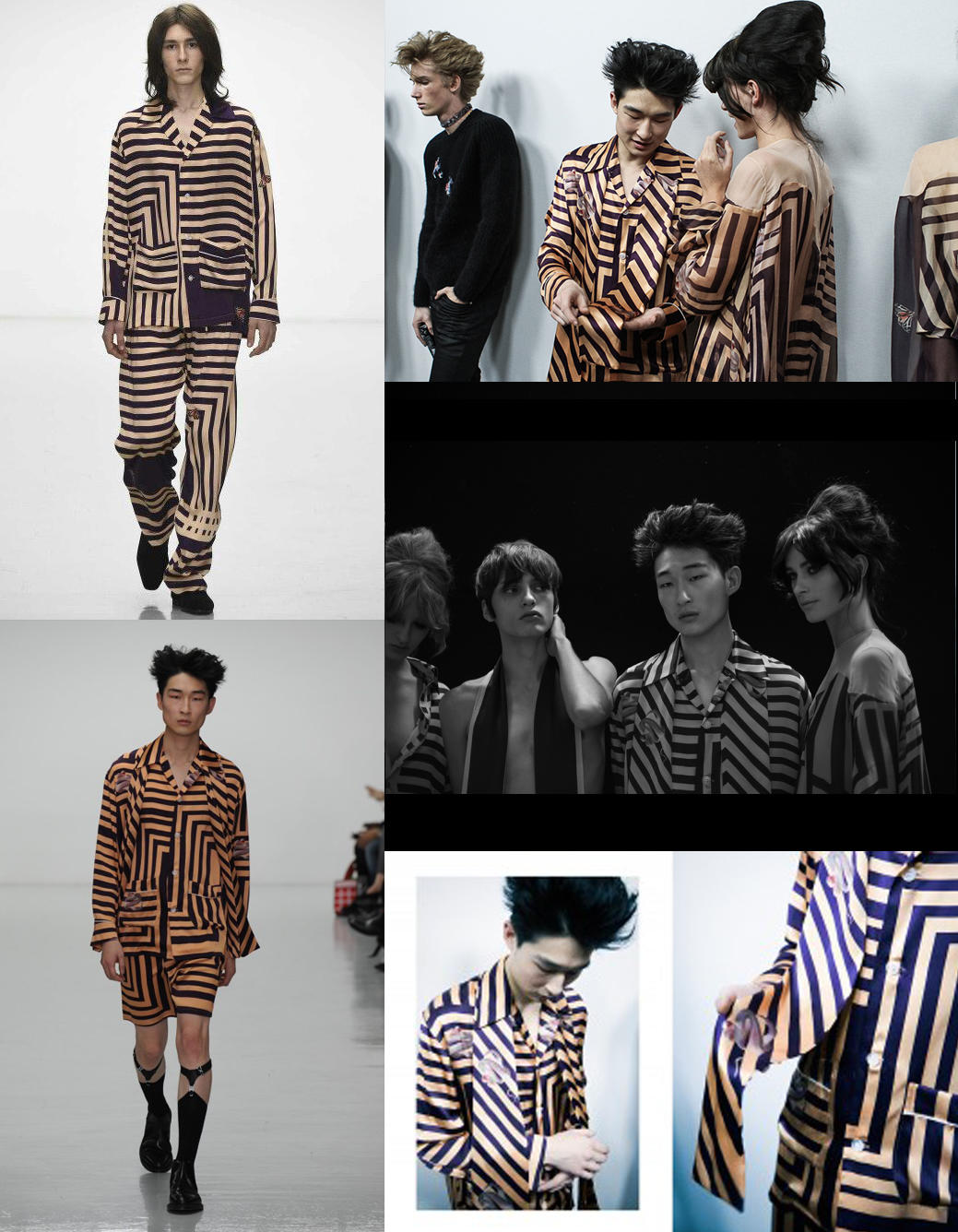 In addition, the name of Dada is of great meaning, the Japanese screenwriter Masahiro Yamada (山田 正弘)  named this extraterrestrial after "Dadaism". The idea was to use the chaotic and destructive genre of Dadaism to symbolize the mysterious unintelligibility of this cosmic weirdo. 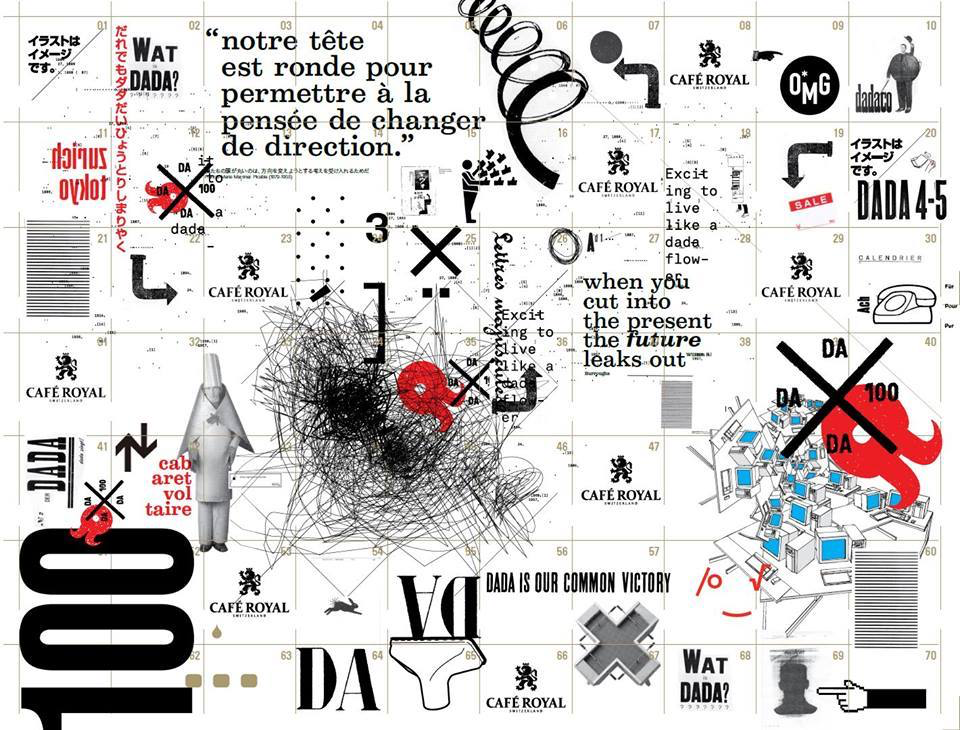 Although Dada is derived from Dadaism, I think its existence is not limited to Dadaism. As a classic SFX Ultraman series monster, Dada's images have been used, consumed and recreated by secular society, and have great Pop value, which is referred to as "Pop's Dada" in the title of our article. 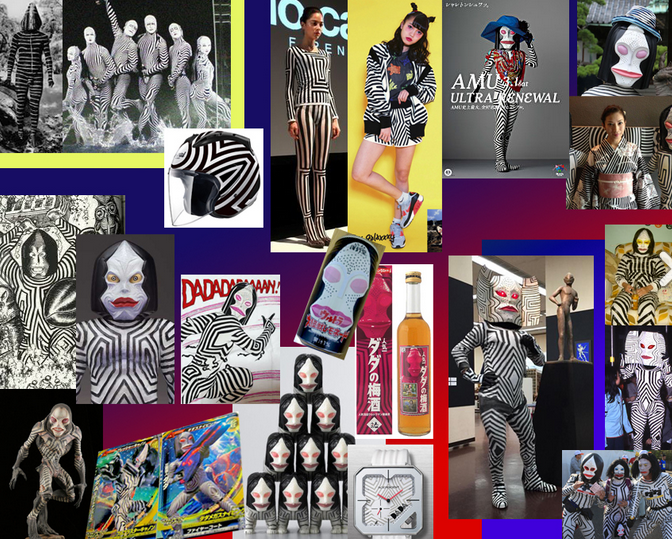 The year 2016 is the 100th anniversary of the birth of Dadaism. As the country of dadaism's origin, Switzerland has held a series of commemorative activities around the world. Among them, In The event held in Tokyo, Japan, Switzerland invited Dada to attend the press conference as the special guest. 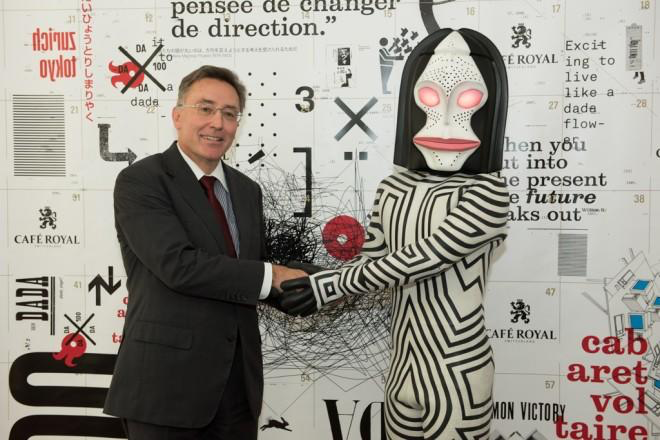 The ambassador posed with Dada. 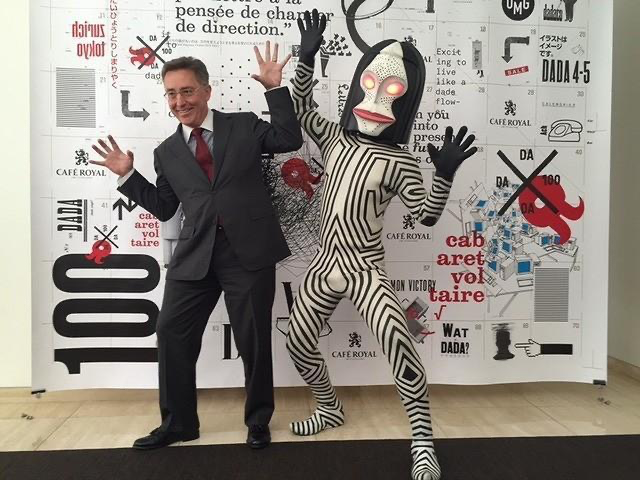 As a man of the universe, Dada also held a talk with The Master of Rakugo, Kyotaro Yanagiya (柳家喬太郎), in this commemorative activity. I think maybe because of the anti-traditional spirit symbolized by the name of Dada, it is quite consistent with the reform of traditional Rakugo art in Japan.

In addition to the 100th anniversary of the Dadaism commemorative activities, the large shopping center ア ミ ュ プ ラ ザ in Fukuoka, Tokyo, Dada was also used as a promotional poster for the 3rd anniversary of its opening.

In the popular travel show Ultra-Monsters Go For A Walk (ウルトラ怪獣散歩), click to view, Dada walks with Zarab-seijin (ザラブ星人) and Alien Mefilas (メフィラス星人) through the urban areas of Tokyo, eating soba noodles. 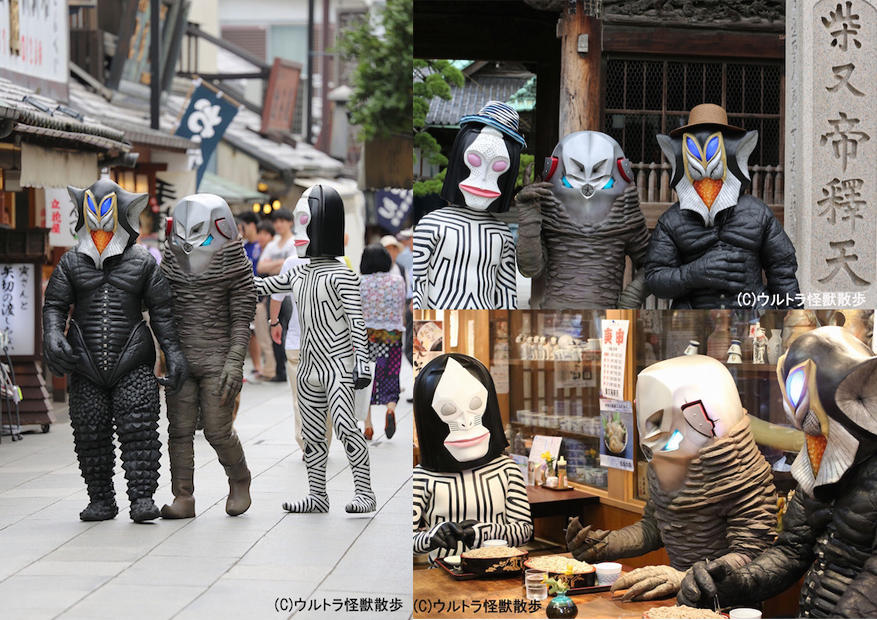 The pure rice brew, produced in Director Tsuburaya's hometown of Fukushima prefecture, is naturally endorsed by Dada. Made by Nihonmatsu's popular liquor, spotting Dada toiling in the fields, and of course, can't wait to try this "Pure Rice Total Attack", although it was just an advertisement haha. 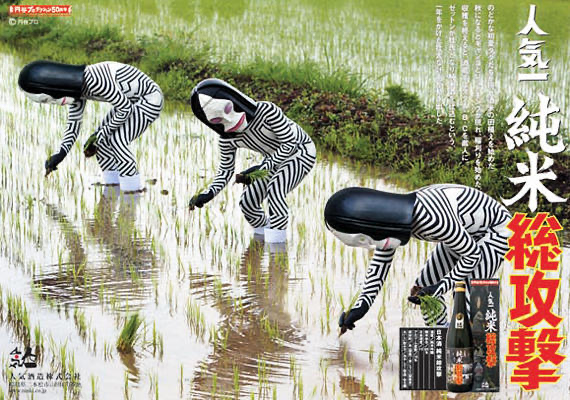 Proceeds from the sale of the Pure Rice Brew will directly go to the Ultraman Foundation, which supports children affected by the earthquake in Japan. 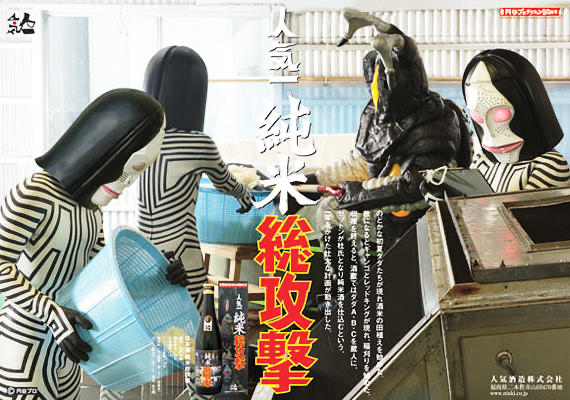 Whether posing with a woman in a kimono, a girl's underwater portrait, or a dada themed manicure, they are the collision of reality and surrealism, but present a striking harmonious beauty. 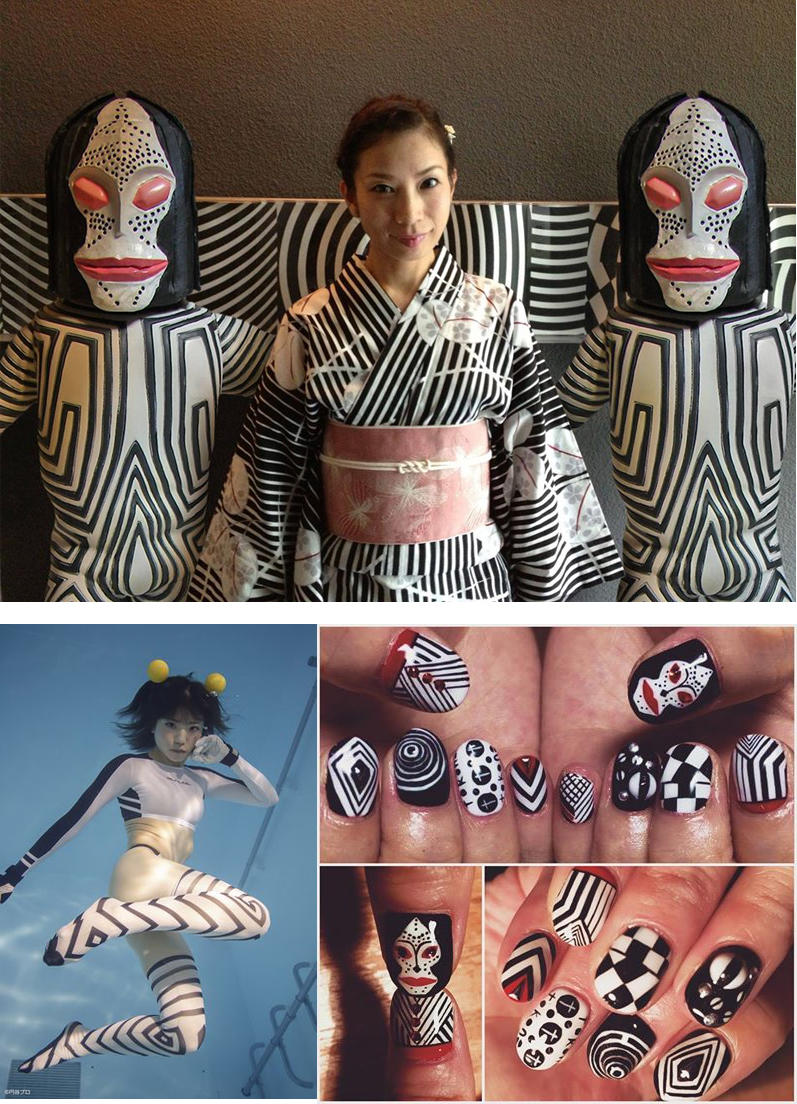 Both the Dada from Dadaism, and the Pop Art Dada, 86fashion doesn't hesitate to believe that Dada (ダダ) is always the most avant-garde, unique monster in the Tsuburaya's SFX movie.